I’ve been gone a while.  Life often throws you a curve ball, but I’m back now.

A few weeks ago, on Mothering Sunday, I visited the crematorium because, many years ago, that is where my Mother’s ashes were interned.  It’s a peaceful place.  The grounds and flowers are beautiful, but I particularly like the open gate at the boundary and the path that leads to a wooded area.

When my Mother was alive, she wouldn’t have lingered at the crematorium, she would have wandered off through that gate.  So, I jumped into my car and drove to a nearby municipal park.  There are a few in the area and as a child, I visited them all with my Mother.  She liked the bandstands and cafe’s that served tea in china cups and home-made cakes on china cake stands, but most of all she liked the gardens.  Municipal gardens tended to be laid out uniformly, but I remember they were always full of bright and beautiful fragrant flowers.  It was a more suitable place to remember her.

When I got home I loaded the washing machine and flicked the switch.  It wasn’t as easy as that for my Mother.  Back then, each day of the week was given over to a particular task and Monday was washday.

She would get up early and drag the copper, very like the one below, toward the gas pipe which was next to the sink.  The pipe from the copper would be attached to the gas pipe on the wall.  She would light it underneath and then set about filling it with water, a bucket at a time, and then leave it to heat up.

In the mean-time, the dolly tub and mangle were taken out of the shed and put in the yard outside the kitchen door.  The dolly tub was filled up with cold water.  One washday, my sister was messing about and fell in headfirst.  There were other mini crises like fingers nipped by the mangle or clean washing falling on the ground.

The clothes were separated out into whites and different colours.  The collars and cuffs on the shirts were hand pre-washed with washing soap and a scrubbing-brush.  Overalls and the like would be soaked in the sink to remove most of the dirt.  The cleanest clothes would be placed in the copper first as the water was only topped up, not replaced.  The clothes would be agitated occasionally and when they were clean, removed with wooden washing tongs. 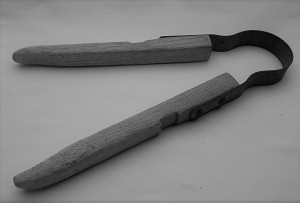 We could help with the next stage.  The clothing was lifted with the tongs, as it was still very hot, and passed through the mangle.  The garments were then placed in the dolly tub to be rinsed.  We had a copper posser or ‘ponch’, as we called it, which we would pound the clothes with to ensure that they were thoroughly rinsed.

Finally, they would be passed through the mangle a couple of times and then pegged on the line to dry, or if it was raining, put on the clothes horse in front of the kitchen fire.  For some items, there were other procedures like starching and Reckitt’s blue bag for whites.

After that, the equipment had to be drained of water and put away.  The work was really quite physical, and it would take up the entire day!  It’s no wonder people had a sense of peace and pride watching their clean washing billowing in the breeze.  Sad, some of you might think, but I still like to watch the washing on the line, maybe it’s that thread to the past.  Of course, in the winter it was a different story, the kitchen was damp and dripping with condensation as the clothes took ages to dry in front of the fire.

I suppose a crafty make, in keeping with this memory, would be the peg doll.   You could stick to the old nostalgic style or create something modern.

One thought on “Washday with my Mother”